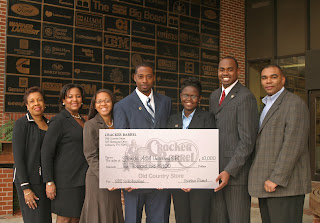 Florida A&M University announced the three-year commitment of scholarship support from Cracker Barrel Old Country Store® to provide tuition assistance for students in the School of Business and Industry. Cracker Barrel will provide a total of $30,000 for six scholarships annually over a three-year period to assist students who have displayed an interest in the hospitality industry and who have a minimum grade point average of 2.5.

“Since both of my parents never completed high school, they have struggled to provide a decent standard of living for my sibling and me,” said Giles Paul. “As the first in my family to attend college, I am determined to work hard to achieve my goals in life. Having adequate funds is essential to the completion of my college education. The scholarship that I received from Cracker Barrel will greatly assist in furthering my studies. My parents and I are most appreciative.”

“Words cannot express how grateful I am to be a recipient of the Cracker Barrel scholarship for Spring 2009,” said Jeremy D Mounticure.

“Cracker Barrel is very pleased to provide this scholarship support as part of our overall commitment to achieving business excellence by embracing diversity and inclusion,” said Diana S. Wynne, senior vice president of Corporate Affairs for Cracker Barrel. “We believe that welcoming diversity in our company, our retail stores, and our restaurants, is good for business and, more importantly, good for people.”

About Cracker Barrel
Cracker Barrel Old Country Store restaurants provide a friendly home-away-from-home in their old country stores and restaurants. Guests are cared for like family while relaxing and enjoying real home-style food and shopping that’s surprisingly unique, genuinely fun and reminiscent of America’s country heritage…all at a fair price. The restaurant serves up delicious, home-style country food such as meatloaf and homemade chicken n’ dumplings as well as its signature biscuits using an old family recipe. The authentic old country retail store is fun to shop and offers unique gifts and self-indulgences.

Florida A&M University is soliciting the help of its supporters to raise at least $100,000 for the Marching “100”’s “Road to Washington and Beyond Campaign.” One of the upcoming fundraisers is the “FAMU Band Sunday” scheduled for Sunday, December 14, 2008. The University’s Division of University Relations is asking churches throughout the community to take up a special offering to support the band’s trip to Washington.

The university also is asking individuals who are interested in supporting the trip to make a donation online by logging onto http://www.famu.edu/GiveToThe100 or to provide a check payable to the FAMU Foundation with “Road to Washington” in the memo line. Checks should be mailed to FAMU Foundation Inc., P.O. Box 6562, Tallahassee, Florida 32314-6562.

The University was notified on Friday that the Marching “100” had been selected to participate in the President’s Inaugural Parade scheduled for Tuesday, January 20, 2009 in Washington, D.C.

University officials have set a deadline of December 31, 2008, to raise the required funding.

“We are optimistic that the community, our alumni and supporters will help us to reach this goal,” said Carla Willis, vice president for University Relations. “We began our fundraising efforts this weekend with an email blast and already we’re seeing the results. We are going to need the collective support of all of our stakeholders to reach our goal.”

Florida A&M University’s Marching “100” has been selected to participate in the President's Inaugural parade on Tuesday, January 20, 2009, in

A telephone call on Friday to Dr. Julian White, director of bands and chair of FAMU's Department of Music, was unexpected and changed the course of the band’s practice session.

December 5, was a typical band rehearsal for FAMU Marching “100” as they created unique formations with high-stepping techniques. According to White, he received a telephone call during rehearsal congratulating him that the Marching “100” had been selected to participate in the inaugural parade.

“When I heard that we were selected, I immediately asked them to repeat it again,” said White. “I put them on speakerphone and put the phone to the microphone so that the entire band could hear the invite. As soon as the band members heard the invitation, they went berserk. They were screaming and shouting. They started calling and sending text messages to their family and friends informing them of the wonderful news.”

“For Florida A&M University to be a part of such a historical occasion is truly an honor,” said James H. Ammons, FAMU's president. “This nation will have an opportunity to see once again what we all know — the Marching “100” is this nation’s most talented, dynamic and innovative university band.”

White is also proud of the band.

“I am proud and elated that the 420 piece Florida A&M University Marching Band has been invited to participate in the historic Presidential Inaugural Parade,” said White. “It is an honor to have the opportunity to represent the university, the City of Tallahassee, and the State of Florida. The invitation to Present-elect Obama’s Inaugural Parade is by far what we are most proud of. We would like to thank our President Dr. James H. Ammons who has supported us every step of the way.”

“Words can not express how we feel,” said Paul, a senior from Miami majoring in music education with a concentration in performance. “We consider this to a great privilege for the band to be part of this historical event.”

To be considered to participate in the inaugural parade, the band had to submit an extensive application. White stated they sent a DVD of the band’s marching performance as well as audio clips. A 50-page media kit also was sent highlighting the numerous accomplishments of the band over the years.

“It was a hard job to condense some many years of accomplishments into just 50-pages,” said White.

Now the challenge is funding. According to White, he estimates that the cost for three nights of lodging and the travel expenses to and from Washington, D.C. could cost from $90,000 to $100,000.

“We are really going to need the help from our supporters, the FAMU community, our alumni, and the local community,” said White.
Posted by News Rattler at 6:04 AM No comments: 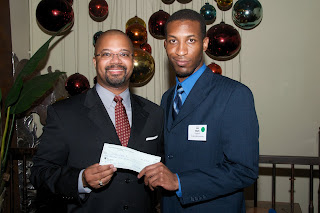 “Although I was confident in my accomplishments and what was submitted for the award, I was shocked when they announced me as the recipient,” said Taylor, a senior public relations student from Toledo, Ohio. “I had to work hard. I did my research, wrote and re-edited my submission using what I’ve learned from FAMU and work experience.”

Taylor’s press release on the recent academic achievements and social highlights at FAMU was a key component in his receiving the award. According to Taylor, he wrote the press release so that it would appeal to journalists.

“BPRS/Atlanta was pleased to award Mark the 2008 Beacon Award because of his quality work,” said Keith Aikens, president of BPRS/Atlanta.

According to the BPRS/Atlanta Web site, Taylor will also receive a scholarship that is given annually to an African-American undergraduate student who demonstrates leadership qualities and a commitment to achieving excellence as a future public relations professional. In fact, several panelists at the PR Summit lauded FAMU students for demonstrating professionalism and leadership.

“Mark is a very hard-working student who has a passion for public relations,” said Dr. LaRae Donnellan, professor and former PRSSA faculty advisor.

The BPRS/Atlanta PR Summit is an opportunity for students to network with several middle and senior-level PR professionals through panel discussions, breakout sessions and hands-on workshops. Students also discuss important issues with professionals from the black perspective, like how to make career choices and how to successfully transition from college into the workforce.
Posted by News Rattler at 6:03 AM No comments: